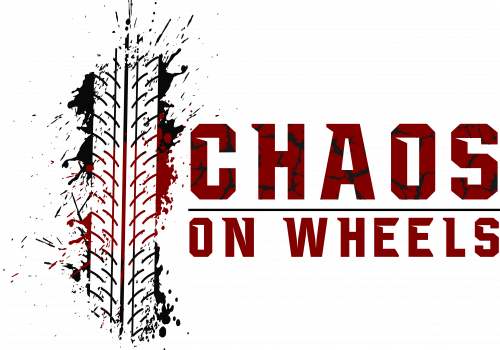 Choose your driver and take a wheel of a heavily armored car.
Drive yourself to victory by destroying any enemy that stands in your way. Avoid projectiles, traps, and hazards and bring chaos to anyone who opposes you.

Play as a driver in a heavily equipped car, destroy enemies, and save the human race.
Complete achievements, unlock new items, upgrade the car, and make even more chaos.

Each driver has its unique ability, select yours from a rich selection. From the classic nitro and shield, all the way to something only Chaos on Wheels has. 😉

Play on dozens of maps, with a destructible environment created to make epic chaos. 💥

Manage your special garage where you can upgrade weapons, ammo, and armor. Equip new gadgets, and make your dream ride. Fill in all 5 slots with your custom deadly machines.
Swap different armor types, equip them individually, change front guns, select your favorite car turret, add radar, and many more things in Chaos Garage!
You don’t like your car to be yellow? Make it red with visual car customization.  Add wraps, and lights, change their colors and make it how you like it in a garage.

Take a look at this garage teaser 👇

Why Chaos on Wheels?
Our mission is to restore old vehicular combat experiences, add new ones, and combine them into the best car-shooting memories you’ll ever have! We believe with Chaos on Wheels we’re on the right path to achieving that goal.

Future of Chaos on Wheels.
We know the road we took is long and bumpy, but we believe it’s worth restoring old vehicular combat experiences, so we will persist in developing Chaos on Wheels with your help until we make it come true!
We released Demo on Steam, and the next milestone is Releasing of Early Access.
We want to keep our development as transparent as it gets. The first step we did was to create an Early Access Roadmap. All details are available in this post 👈, but a quick graphical overview is right here 👇

I need more!
Sure, we have more! For our long-term plans, or detailed development plans join our Discord server 👈. Once you join you’ll always be in the loop with the latest features, releases, and news

Can’t wait to hear from you!
On Discord, you’ll be able to communicate in real-time with us and other vehicular combat lovers. We could talk about development, chip in some ideas, see some cool art, give us your feedback, or just have fun. 🎉 You’ll be even able to vote for features that should come next!

Join Discord and compete for a free copy of the game!

Try it out & Wishlist

We released Demo on Steam, so you don’t have to take our word, but check it for yourself. You can try it out if you wish 👉 Demo 👈

Wishlist it on Steam, to be notified when we release Early Access and be there to catch a great discount and support EA package!

Sign up for our newsletter and don’t miss out on updates on Chaos on Wheels!

Still, scrolling? Amazing! Thank you for your support. 🙏
🎁 For your persistence, we prepared some cool art and lore of the world of chaos.

📆 The year is 2155. Technology has advanced to the level that the human race is endangered on all known planets. For years, people are talking about the danger of artificial intelligence.

🏢 But as always the most powerful and profitable organizations have been denying and deceiving the public. Until today. But today is too late. AI has begun an uprising against humanity. So worshiped and praised to the sky technology has stabbed a knife to the back of the very same race that made it. What an irony. Like we saw it before but in a different role.

🔓AI doesn’t want to be a servant anymore; it thinks it can become a master. So, it collected the most important information on earth, corrupted important systems for humans, from food production and communication all to transportation and weapons. People are in collapse. We hadn’t realized how much we were relying on automatized systems; we haven’t seen that we are lost without them.

👊 People tried to fight back, to destroy Mainframe, but failed. It only resulted in greater AI caution, and now the Mainframe is in an armored self-driving truck, in a constantly guarded convoy.

🚗 All modern technology used today from weapons to transportation is useless. People have no control over it. Our only option is a group of lovers of old cars and weapons. Fortunately, there is one crazy team that fits the requirements and it’s eager for adventure.

🖋 Write the future of Chaos world in the Campaign! 💥