🛣 A roadmap?! You’re probably thinking you’re dreaming. Well, you’re not! Steam Early Access roadmap is finally here. 🎉🎊🎈
We have a lot on our back, and we didn’t want to promise something we couldn’t make, so it took us a long time to create an official roadmap. Once we figure it all out, we’ve done it. So here it is 👇 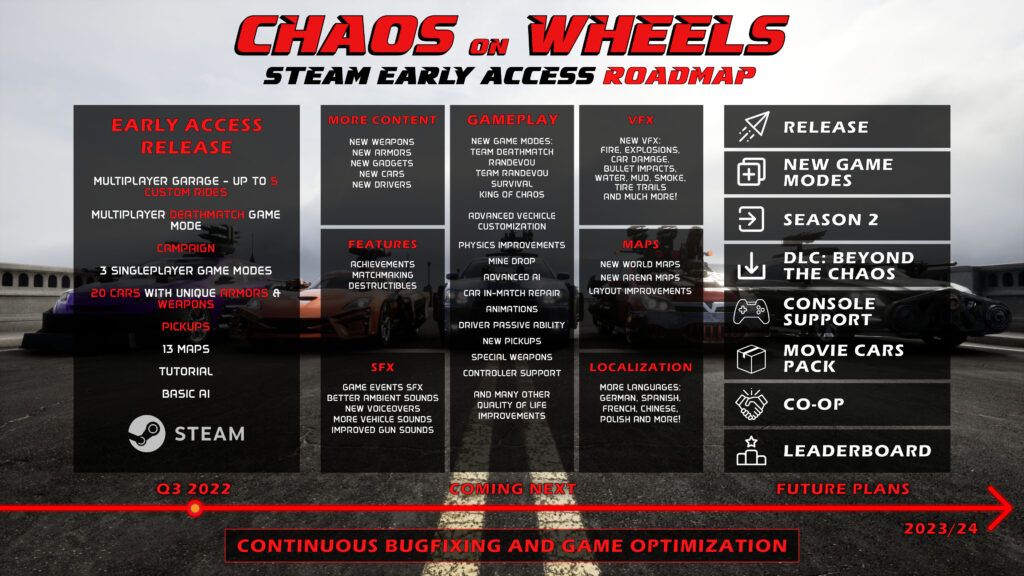 📍 Why Q3 you might wonder? We do have a planned date, but we also have a checklist of what we need to achieve to release it, hence the Q3. But don’t you worry, we’ll tell you the date right on time.
Until then, try out the Demo. Its release is tomorrow! 🎈🎈🎈 (24/3/22) 📆 Demo link 👈
As you might see in one of the many videos we posted, our goal is to have a lot of quality game content, so in Early Access, we’re bringing you 20 amazing cars and 20 unique armors and weapons. We’re also bringing you tons of gadgets to equip on your rides. Each armor, weapon, or gadget will be available to equip on every car. All that will be possible in your own multiplayer garage. How will this work?
🔧 Imagine having your own, wrench-filled garage, with 5 car spots. You did? Okay, now add tons of armor, weapon, and gadget to it. Now that’s your Chaos on Wheels garage. 🚘
Each player will have its garage on the server. You’ll have money that can be used to trade cars, armor, weapons, and gadgets. Money will be earned while playing against other players. In Early Access, we’ll have one multiplayer game mode. A deathmatch. Later on, we’ll add more.
💵 I’ve got cash, I’ll buy everything! – Not so fast Jonny Cash. We have a level progression system. In order to buy specific weapons, cars, or gadgets, you’ll need to meet specific criteria. In some cases, it will be levels 🔟. During your destroying spree, you’ll earn experience. More exp, the higher level. We all know how that goes.
🚗 The limits of car customization will always be pushed, but for starters in Early Access, you’ll be able to:
Every car needs its driver. Well… maybe… ahh… Anyway, our cars in Chaos on Wheels do need them, so you can pick your driver as well. Each driver has the ability that can be used in the match. From the classic nitro and shield, all the way to something only Chaos on Wheels has. 😉
You don’t buy drivers, as that seems, a little bit too weird😆. Or illegal ⛔. No, you unlock them. (yeah, much better…) 🔓 Either through leveling up or challenges, or some other ways, once you unlock it, you have it and you can select it.
⚙In general, that’s how a multiplayer garage will work. ⚙
What about the singleplayer? 1️⃣
😩 We all have been there; having a rough day, and all we want is to sit back in our chair and casually destroy everything that’s virtual. In that case, you can start singleplayer custom game. Select one of three game modes (Turret battle, deathmatch, or team deathmatch), customize your deadly machine, and to the job 💥
But don’t think that singleplayer can’t be challenging. A no, no, no ❌ We heard that challenge is a good thing, so we added it. Let’s just say that Hard, is good ol’ fashion hard.
During our dev freedom, we took a step even further than hard, and added game difficulty called Chaos. 🔥
We won’t tell you much about it, let the word speak for itself.
🌟 Pickups are kinda self-explanatory. There are car repairing, armor repairing, weapon heat freezing, weapon heat cooldown, missile resupply, driver ability cooldown, special rocket, and so on.
❔ Basic tutorial that will show you the basics. Nothing much, but it’s honest work.
🦥 Basic AI – You know that first version of bots, that are there just so you’re not alone? We kinda have that type right now. We will give them a little bit 🧠, but don’t expect some amazing smart bot to play with you on an Early Access release day. They will be improved over time, it’s just not our first priority for Early Access. Honestly. 😁
About the features that are coming after early access and long term plans, you can find out more on our discord server 👈
You’ll be even able to vote for features that should come next. Well once we set it up 😋
Looking forward to seeing you there 😎
Ciao, until the next one!

🌠 Wishlist Chaos on Wheel on Steam 👇